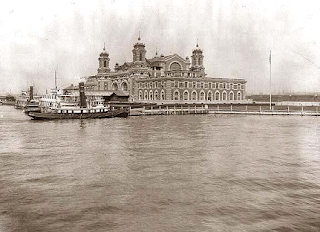 One of the most common stories in American family lore is that officials at Ellis Island changed an
immigrant ancestor's name. It's a persistent myth and one that isn't true.

For the 125th anniversary of the opening of Ellis Island, Smithsonian.com examines the history of immigration in the US and explains the truth about immigration officials and names. Here are a few key points from the article:


Ellis Island inspectors were not responsible for recording immigrants’ names. Instead, any error likely happened overseas.

At the shipping line’s station in Europe, a clerk wrote the passenger’s name in the ship’s manifest, sometimes without asking for identification verifying the spelling.

The ship’s manifest was presented to Ellis Island inspectors after the boat docked. From there, the inspector would cross-reference the name on the manifest with the immigrant passenger, and also ask 30 questions to screen out rabble-rousers, loafers, or the physically and mentally infirm, but also to glean information on who they would be living with and where in America, says Urban. The inspectors also would see if the answers matched those recorded by the shipping clerk before departure.

“If anything, Ellis Island officials were known to correct mistakes in passenger lists,” says Philip Sutton, a librarian in the Milstein Division of United States History, Local History and Genealogy, at the New York Public Library, in a blog post delving into the name change mythology.

More commonly, immigrants themselves would change their names, either to sound more American, or to melt into the immigrant community, where they were going to live, says Sutton. If name changes happened with any frequency on Ellis Island, it was not noted in any contemporaneous newspaper accounts or in recollections from inspectors, Sutton says.

Read the entire article to learn more about immigration in the late 19th and early 20th centuries.
at 9:40 AM