If you are searching for free African Americans in the colonial South, we have two valuable volumes
in our collection: 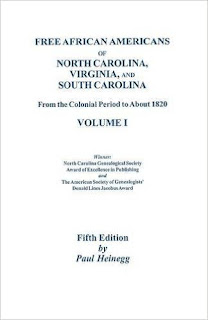 Both books are by Paul Heinegg. While working on his own genealogy, Heinegg became interested in the history of free black families in the South. Many free African Americans were freed in the seventeenth and early eighteenth centuries. They often formed relationships with white servants or Native Americans and owned land and property. With the spread of plantations in the mid-1700s, legal restrictions on miscegenation and manumissions and increasing racism, caused free people of color to migrate elsewhere or to begin "passing" as white. Some freed African Americans were even forced back into slavery. Heinegg's work is indispensable for understanding and following the lives and genealogies of free people of color in the colonial period.

This is an important volume for researching African Americans in the colonial era.
at 10:59 AM