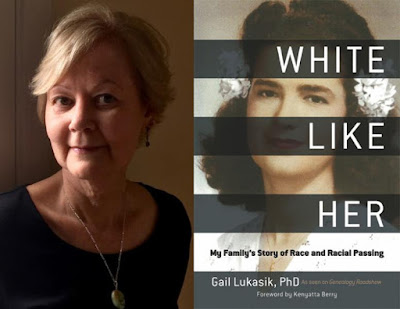 On Saturday, February 9, local author Gail Lukasik will be here to share her personal and genealogical journey to uncover her mother’s racial heritage.

After her appearance on PBS’ Genealogy Roadshow where her mother’s life changing secret was revealed, Gail was inspired to write White Like Her. The book is the story of her mother’s “passing” for white, her struggle with the shame of mother’s choice, and her subsequent journey of self-discovery and redemption. In the historical context of the Jim Crow South, Gail explores her mother’s decision to pass, how she hid her secret even from her husband, and the price she paid for choosing whiteness.

Haunted by her mother’s fear and shame, Gail embarked on a quest to uncover her racial lineage, tracing the Frederic family back to 18th century colonial Louisiana. In coming to terms with her decision to publicly “out” her mother, Gail changed how she looks at race, racial identity, and her black heritage.

Register online or call the Reference Desk at 847-729-7500. This program is presented in partnership with the North Suburban Genealogical Society.