Are you looking to get away this summer and do a bit of genealogy research but don't know where to start? Cyndi's List has compiled lots of excellent links to different tour and travel groups that specialize in helping you discover your heritage. Travel anywhere from Ellis Island to the Czech Republic!

If you're planning on travelling this summer by plane, you'll probably be leaving from either Midway or O"Hare; but at one point, you could have chartered a flight right from Glenview. In fact, in the late 1920s, it seemed that Glenview would become Chicago's major airline hub.

The area around the Chicago Municipal Airport (now Midway) was becoming surrounded by both new residential neighborhoods--which encroached on the airport's ability to expand--and new industry--which created smokey, unsafe air conditions for pilots. Seeing an opportunity, land was purchased in north Glenview to create the next major Chicago airfield and the Curtiss-Reynolds Airport opened in 1929. Curtiss-Reynolds boasted modern clubhouses, state-of-the-art lighting, a pilot training school, and the largest hangar in world at the time. Unfortunately--just nine days after the airport was dedicated--the stock market crashed, the Great Depression began and the demand for commercial aviation started to decline.

The Curtiss-Reynolds Airport managed to stay open during the 1930s by hosting entertainment events such as National and International Air Races and commercial companies would offer sight-seeing tours over Lake Michigan. In 1937, the Navy began leasing space in Curtiss-Reynolds' Hangar One. Soon the airport became the Glenview Naval Air Station.

You can read a fun article from a September 1929 issue of The Chicagoan here. The author visits the newly built Curtiss-Reynolds Airport and learns about the burgeoning aviation business. It's really fascinating! Imagine flying for only 35¢ a mile!

And if you're interested in more of Glenview's early aviation history, visit the Genealogy & Local History Room where we have books and articles on Curtiss-Reynolds and the Naval Air Station.

Genealogy research trips can be incredibly informative but require a lot of planning. It's better to be fully prepared before you begin your journey so you can get the most out of your trip. Here are some tips to help you prepare:

These are just the basics. Here's a great 20 minute discussion presented by the Midwest Genealogy Center and FamilySearch about preparing for your trip.
at 4:46 PM No comments:

According to the latest census information, more than 35.5 million Americans claim Irish ancestry. In fact, more than an estimated 70 million people around the world claim to be of some Irish descent.  In honor of those with Irish heritage, Tourism Ireland has announced 2013 to be Ireland's Family History Year. There are plenty of talks, seminars, clan gatherings and activities scheduled to keep an Irish researcher busy. And in October, you can attend Back to Our Past--a large genealogy conference in Dublin.

Visit The Gathering and Ireland.com for more information about Irish heritage activities and other pertinent tourist information.

If you cannot make it to Ireland this year, a great Facebook page has been created in honor of the event. They have been posting great links to digitized materials and the site hosts expert Q&As where you can send in your Irish family history questions.
at 12:59 PM No comments:

Have Book! Will Travel!

The Glenview Public Library's annual Summer Reading Program, Have Book. Will Travel, begins on Saturday, June 8. Remember to signup at the Reader's Services Desk to earn prizes for what you read this summer.

And to celebrate our Summer Reading theme, this blog will be be focusing on travel and genealogy this summer.

At a certain point in your genealogy research, you will realize that you cannot do all of your research online and you will actually have to venture out and visit libraries, archives, historical societies and courthouses to continue your research. These research trips can take you to different parts of your home state or to different parts of the world. Genealogy research trips can help break down your brick walls and verify information you've only seen online.

We will explore genealogy research trips this summer so you'll be prepared for your next excursion! And remember to check out all of the Summer Reading events happening at your library! 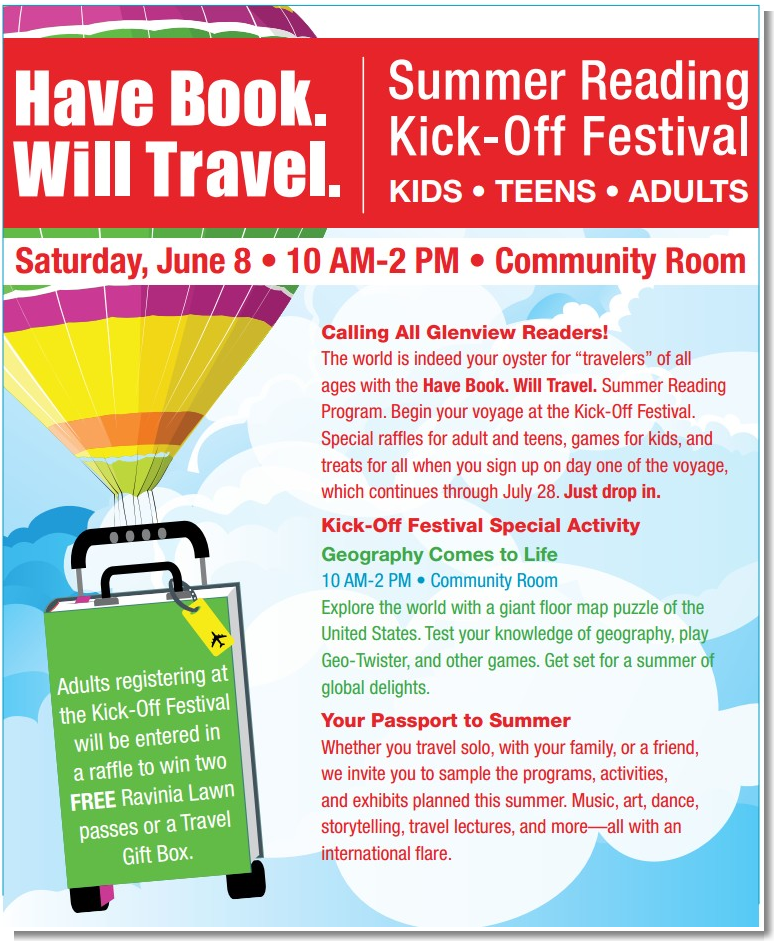 Just a reminder that the Genealogy & Local History Room is open throughout the summer. We have volunteers who keep the room open and who are willing to help you with your research.

Volunteers staff the room on:

If you have an interest in genealogy or Glenview history, we have volunteer opportunities available. You can fill out an application or contact Kimberly Schlarman for more information.

This is such a fun blog! The Photo Detective by Maureen A. Taylor sponsored by Family Tree Magazine investigates mystery photos sent in by readers.

Most of us have inherited boxes of unidentified photographs. Photo historian Maureen Taylor analyzes photographs using clues such as fashion, hairstyles and background props to help identify the time period and the people in the photographs. You can submit your own mystery photos for Maureen to analyze. She discusses how photographs can be used to supplement your family research and best practices for preservation.

The Photo Detective is just an enjoyable read too. There is a lot of interesting social history there and old photographs are always fun to peruse.