In addition to our Glenview history collection, we have a large selection of local histories for communities throughout Illinois. If you're researching local families or the history of the north suburbs, we have many items that can help you out.

One item particular to our library is A Tour of Old Niles Centre compiled by the Skokie Historical Society. The village of Skokie was incorporated in 1888 as Niles Centre. The village voted to change the name to Skokie in 1940.

This pamphlet guides you on a walking tour of historic Skokie sites. What did the corner of Lincoln and Oakton look like in 1834? Who were the early settlers of Niles Centre and where did they live? The Skokie Historical Society explains the history of the village and describes its historic sites and events. It's a fun little tour of north suburban local history.

You can find other items on Skokie history here.
at 2:25 PM No comments:

Join us this Thursday at 2 PM for class on European genealogy. We'll cover the process for researching ancestors in Europe and how to track down European sources.

The most important part of researching Italian ancestors is finding their place of origin. Until Italy unified in 1861, each region, city-state, and duchy had its own method for record-keeping. Luckily for Italian genealogists, most families traditionally stayed in the same area of Italy for generations so you may only need to become familiar with one region's records.

After discovering the town of origin, the major records you'll be searching for include:

Civil Registration Records
These are records of births, marriages, and deaths. When Napoleon conquered large parts of Italy in 1804, he established civil record-keeping. Napoleonic Era records are kept it each state's archive. After the fall of Napoleon in 1815, most regions stopped civil registrations but some communities continued the registers. From 1815-1865, the creation and location of these civil records will vary from town-to-town. State record-keeping began again in 1866 and these records can be found in the registrar's office of your ancestor's hometown.

Church Records
In the early 1500s, the Catholic Church began requiring their clergy to keep records of baptisms, marriages, and burials. Some parishes may have begun documenting these rituals centuries before.
Unfortunately, Church records may not always contain a lot of information.

Census Records
The first Italian census was taken in 1871. Censuses are taken every ten years. From 1871-1901, census information varied from region to region. Most of these records, only list the head of the household. In 1911, censuses began documenting detailed information for every member of the household.  Census records are held at the state archives of each province.

Family Status Certificates
These are unique Italian records of family groups that can include information on at least three generations of family members. Certificates list every individual in the household as well as all parents' names, maiden names, and residences of family members who have left the community. They are held in the registrar's office of the family's town of residence. Availability of certificates vary from region to region.

The Death of Robert Kennicott 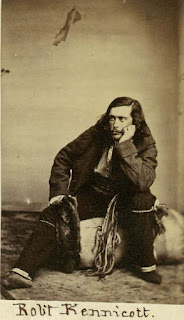 For more information about Robert Kennicott's adventurous life and death, read A Death Decoded about his final expedition to Alaska. You can also peruse Kennicott's letters and correspondence in the Kennicott family papers on microfilm.

Search for your Irish ancestors for free at the New England Historic Genealogical Society!

When you create a free account with at NEHGS, you will have access to their Irish records.You can also find ebooks and research guides on Irish genealogy.
at 11:59 AM No comments: